Syringomyelia (sear-IN-go-my-EEL-ya) is a progressive disorder of the spinal cord where a cyst forms inside of the actual spinal cord. Over time the cyst, also referred to as a syrinx, elongates. It can be congenital, with or without the prescience of Chiari, caused by trauma or a tumor. The increased use of the MRI, magnetic resonance image, has significantly increased the number of people being diagnosed with Syringomyelia, also known as SM. Because it is a spinal cord disorder, and the spine connects nerves the brain to nerves in the extremities, the damage can result in extreme pain, weakness, and stiffness in the back, shoulders, neck, arms or legs. Other symptoms may include inability to differentiate heat and cold, especially in the hands, and lead to extreme weakness in the arms and legs and even paralysis. In most cases it is associated with a Chiari 1 malformation.

This is a congenital condition where the cerebellum of the fetus is protrudes into the cervical or neck portion of the spine. However, Syringomyelia can also be caused by trauma, meningitis, arachnoiditis, tumor or hemorrhage. Idiopathic Syringomyelia is where none of the previous mentioned causes are mentioned does exist but is very rare. In some cases Syringomyelia does have familial tendencies, but again is very rare. The first cases of Syringomyelia were described over 400 years ago, and little to none was known about the disorder. With the recent developments and advancements in the use of MRI, the amount of people diagnosed has dramatically increased. Compared to the past, significant advancements have been made, even though it is an incurable disease. It is now thought some cases may not ever progress.

Symptoms are numerous and come in many combinations.  Although appearing gradually, symptoms can be brought on suddenly by severe coughing or straining. Some common symptoms include; loss of sensitivity especially to heat and cold, muscle weakness, spasticity, motor impairment, loss of bowel and bladder control, scoliosis, as well as osteoporosis. The majority of people affected suffer from headaches and chronic pain.

In some patients draining the syrinx may be recommended using a catheter, drainage tubes or valves. Reoccurrence of Syringomyelia after surgery may result in additional operations. However they may not be successful long term. Most patients are told to avoid epidurals, manipulation, and any activities that would cause straining. 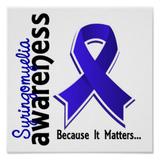