Ryan's family are in the process of creating a documentary sharing awareness about Chiari and Ryan’s story. Here are the links regarding the documentary: 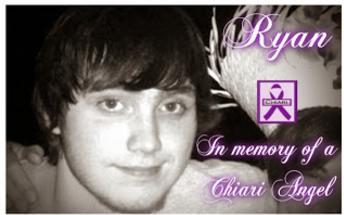 Below is Ryan’s story as told by his mother, Zona McGee:

It started on May 12th, 2013 when our son was diagnosed with Chiari Malformation at the age of 19. My husband was trying to hold our business and livelihood together while our son Ryan was ill and I was literally dying from kidney failure. After Ryan's brain surgery he was finally able to come home after being in ICU for nearly four weeks. But he quickly became very sick and started having seizures. He suffered neurological damage and became totally dependent on us for even his most basic needs. We watched our son go from a healthy happy young man to a shell of his former self. He could not even walk a few feet without collapsing into a seizure. It was exhausting for his frail body.

My son has been ill. Mother's Day he woke up with a major headache...the worst headache of his life. My healthy strong 19-year-old son who was never sick a day in his young life. Two weeks prior he had headaches off and on. I thought it was an allergy or migraine, after all his sister suffers with them once in a while. I told him he needed to get more sleep, eat better. But here he was...laying on the bathroom floor. In terrible pain, throwing up, barely able to stand. Then he said his neck hurt. My first thought was meningitis as his sister looked it up on the computer. He seemed to have a lot of the symptoms. I knew this was serious. My husband and I rushed him into the car and headed to the ER. He could hardly stand the ride there and cried in pain at every bump in the road. When we reached the ER he totally collapsed at the door. The next thing I remember they were rushing him back to a very tiny room and putting an IV in his arm. After many questions from the doctor he said "Probably a severe migraine but I want to do a CT scan to make sure". After the scan the doctor came into the room and this time he was not smiling. He closed the door behind him and sat down. We see a "mass" on Ryan's brain, it’s rather large. But we can't tell what type of "mass' until we do an MRI. All I heard was "large mass". Oh my God, I thought how could this be? It was 3 am and they were whisking him away for an MRI and the neurosurgery team was notified. They told me...20 minutes and we will know. The longest 20 minutes of my life. I could not understand why this was happening ..life could not be this cruel. This was my baby! Finally,. The doctors came in and gave us the news. It was not a tumor but a Chiari malformation. Chiari malformation is an abnormality in the lower part of the brain... the cerebellum. the part of the brain that controls coordination and muscle movement. My son's brain was being squeezed and pushed into his spinal column. He also had hydrocephalus. Water on the brain.

……..My sons illness was first and foremost in my thoughts and everything I have done these past few months. Sadly, he lost his battle with Chiari Malformation on August 11th.  The pain I feel is unbearable at times...everywhere I go everything I do is a painful reminder of what I have lost. It is true that nothing compares to the heartache of losing a child. I have not even begun to process everything that has happened. You see... the whole time my son was ill my husband’s mental health suffered. Over several weeks he became quiet and withdrawn completely shutting out his family. Then it happened...while our son was in the hospital this last time my daughter and I came home and found my husband in the garage. He had violently tried to commit suicide. He simply could not handle the pain of watching our son suffer any longer. Not getting any answers from Ryan’s doctors as to why he was so sick, trip after trip to the ER just to be told there was nothing wrong with him. My husband felt helpless to help our son. They simply did not know enough about Chiari to treat it properly. I am not letting them get away with this if it takes the rest of my life. Ryan had become so weak and could no longer walk and was having seizures almost every day. His doctors denied he was having seizures because they were not considered epileptic. Although in fact it was a seizure that caused his death and herniated his brain stem crushing his spinal column. I was by his side when it happened and it was very quick. Ryan was pronounced brain dead. My husband was fighting for his own life and we did not know if he would make it. I have never felt so alone in my life. He remains in the hospital and has a lot of work ahead of him to hopefully recover physically and mentally. Sadly, he could not even attend Ryan's funeral.

After Ryan's death we were told he had signed his organ donor card. I remember a while back him coming home and being so proud to tell me. It was extremely important to him because he had watched me suffer for years with kidney failure. He wanted so much to donate his kidney to me but I was fearful he would someday inherit my illness. Ryan donated all of his organs. His heart, liver, lungs, skin, pancreas. And one of his kidneys went to me! So many people were saved and lives made better because of my son's generosity. I find some comfort in that fact. Having the surgery so soon after Ryan's death was a hard decision. But one I don't regret making because Ryan wanted so badly for me to be well. We talked about it so much and made plans to go to the beach when we both were well. Our favorite place in the whole world. Now I will be taking my son's ashes to the beach..